by Red Ink Store in ScriptAsk a question

hanks for checking out Aisling Font!

Aisling is a beautiful script font with Irish character.

just type the number after any letter ( 1…2 for uppercase, 1…6 for lowercase)”. So, you can forget about the Glyphs panel and have fun and great results just type numbers after letters. Scroll down and use preview window for testing.
Alternative version added

You can also use an alternate version of the font to select glyphs with your in the glyph panel.

Font is provided in TTF, OTF and WOFF formats.
You can still use the Glyphs panel. You’ll see there 208 contextual and stylistic alternate glyphs and 34 ligatures.
Aisling Font come with PUA Unicode that gives you full access to the ligatures and alternates in software that doesn’t support the extra characters. To access these characters you can use Font Book (Mac) or Character Map (Windows).
Fonts include multilingual support. Western European, Central European and South Eastern European languages are included. Please type characters in text box below to check any characters you need.
Let me know if you have any questions.

Be the first to review “Aisling Font.” Cancel reply 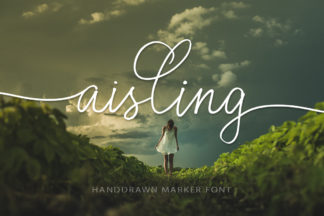