Just in time for the winter holiday of your choice, here are Big Freeze and Big Frost!

(And even though a lot of the promo images are Christmas-based, I made sure to keep the look of these letters not-holiday-specific, so they can be used for any wintry purposes!)

Both fonts also include a variety of smaller catchwords, including: the, and, or, for, from, with, of, by, and many others.

As with all of my fonts, these two include tons of punctuation, and over 200 accented characters each for multiple language support: English, French, Spanish, German, Polish, Romanian, Portuguese, Swedish, Finnish, Norwegian, Danish, Esperanto, Czech, Dutch, Welsh, Filipino, Turkish, and more.

* Big Freeze and Big Frost, each in both OTF and TTF file formats
* Over 400 glyphs in each typeface
* Over 200 accented characters in each for multiple language support
* A full second alternate alphabet in each, including A-Z, a-z, 0-9, and ?!,.
* 16 small catchwords in each
* A couple of extra snow flurry dingbats, just for fun
* Fully PUA encoded for easy character map access

Be the first to review “Big Freeze and Big Frost: a winter font duo!” Cancel reply 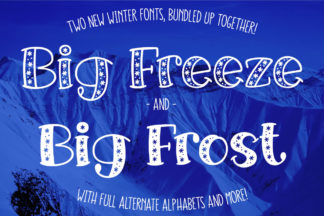