Bobbles: a script font in 3 weights!

Introducing Bobbles, a handwritten script font family with three weights! (It made me think of both bubbles and baubles, thus the name!)

Bobbles is a monoweight script font handy for 1,001 projects. Each of the three weights (Light, Regular, and Bold) includes almost 200 accented and special characters, as well as 15 double-lowercase ligatures and eight intro and outro swashes that are easy to insert — just type one of the eight bracket keys on your keyboard!

I’m also including my Trawll double-uppercase font in this bundle! It pairs beautifully with Bobbles, and also contains the eight bracket characters that the Bobbles are lacking (to make way for those swashes).

Special note: The Bobbles fonts do not contain eight specific characters: parentheses, brackets, braces, greater than, and less than. Those character spots contain swashes to connect to the letters.

Be the first to review “Bobbles: a script font in 3 weights!” Cancel reply 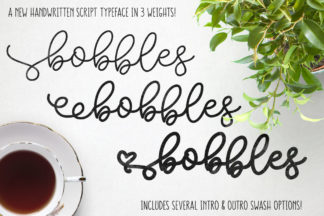