Introducing the elegant new Bulliandry Calligraphy Font! For those of you who are needing a touch of elegance and modernity for your designs, this font was created for you!

These coded with PUA Unicode. Mac users can use Font Book and Windows users can use Character Map to view and copy any of the extra characters to paste into your favourite text editor/app.

Bulliandry come with more Alternative and more Ligature. The alternative characters were divided into several Open Type features such as Stylistic Sets, Stylistic Alternates and Ligature. The Open Type features can be accessed by using Open Type savvy programs such as Adobe Illustrator, Adobe InDesign, Adobe Photoshop Corel Draw X version, And Microsoft Word. And this Font has given PUA unicode (specially coded fonts). so that all the alternate characters can easily be accessed in full by a craftsman or designer.

Thanks so much for looking, I really hope you enjoy it and please don’t hesitate to drop me a message if you have any issues or queries 🙂

Be the first to review “Bulliandry | Modern Calligraphy” Cancel reply 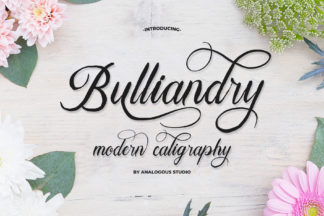