View cart “Babylove” has been added to your cart.

by Natural Ink in Crella Subscription, Fonts, CalligraphyAsk a question

Dongatta Story Script has 290 glyphs. including multiple language support. With OpenType features with stylish alternatives, ligatures and characters, allowing you to mix and match pairs of letters to fit your design, as well as a touch of ornament to make this font look elegant.

How to access all the alternate characters using Adobe Illustrator:
www.youtube.com/watch?v=XzwjMkbB-wQ How to use the stylistic font set in Microsoft Word 2010 or later:

How to access all the alternate characters, using Windows Character Map with Photoshop:

Thank you for your visit

Be the first to review “Dongatta Story” Cancel reply 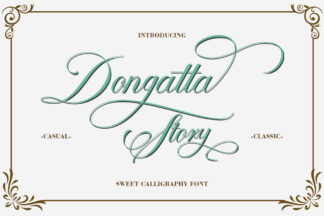