Just imagine that your customers are women. They love to see something beautiful, elegant, and warm, right? You don’t need to get confused to find an interesting font to attract their attention. I have a special font namely “Farrina”. The font design looks simple without losing its elegance and warmness. The function of the font is to show that you have a modern spirit to serve high-quality products and services. I design this font with OpenType features to give an artistic touch on it. This font is also applicable for numbers, punctuation, and other languages. It is also a multifunction font where you can use for a business logo, branding, wedding invitation, and anything you want.

I have more great and artistic fonts. Just check my font collection by visiting Our Profile.

Then, pick your most favorite font and use it to reach your goals.

Be the first to review “Farrina Script” Cancel reply 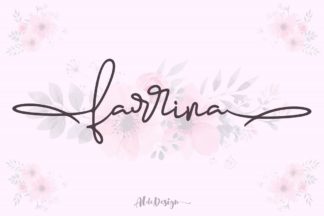