Head Kick is a display font with unique futuristic style. The font was inspired by many street arts ,techno and hip poster. It has a unique style that will bring the special effect to the design. It will works for games, technology, events, spaceship and any other things. Head Kick Font includes full set of Uppercase and Lowercase Basic Characters, Numerals and Punctuation. You can also combine two or more styles on the text like we did on the cover, so you will great even more unique and special font. The font is perfect for many projects, headlines, logos, poster, tittle, products, etc

What’s Included on the package :

Be the first to review “Head Kick Font” Cancel reply 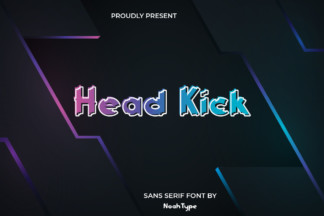