If you are needing a touch of casual chic calligraphy for your designs, this font was created for you!

Hellena script was built with OpenType features and includes beginning and ending swashes, alternate characters for both lowercase and uppercase letters, loads of different swash alternates for lowercase letters, numbers, punctuation, alternates, ligatures and it also supports other languages 🙂 with many glyphs!
Hellena Sans is beauty couple for Hellena Script
Hellena Ornament available OpenType features with klick on All Capital and Lowercase also in Number and get the ornament character.

Accessing the swashes / opentype features / glyphs:
This font works best in a program that supports OpenType features such as Adobe Indesign, Adobe Illustrator CS, or Adobe Photoshop CC. You can access the swashes and alternates from the ‘Glyphs Panel’ in these programs.

More Questions? Here are some (potential) answers!
– You are not permitted to resell this font in any way.
– Multilingual Support is included for Western European Languages 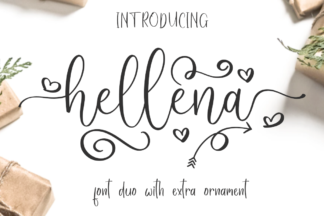