Instalove Diary font was created to look as close to a natural handwritten script as possible by including over 134 ligatures, and lowercase alternates.Comes with two styles of Regular and Italic. Mix and match lowercase regular with several lowercase alternatives to get your new ligature. Perfect for any awesome projects that need hand writing taste.

With built in Opentype features, this script comes to life as if you were writing it yourself.

Thanks for checking out this font.

I hope you enjoy it!

Be the first to review “Instalove Diary” Cancel reply 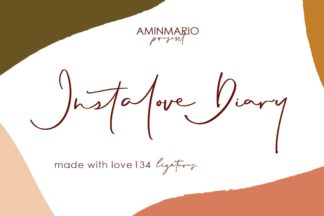