by Flycatcher Design Store in ScriptAsk a question

Kiwi Refresher is a fun loving font duo that couples an off-the-cuff script with an all-caps sans serif! It’s marker brush strokes give it a gritty and eye popping aesthetic perfect for prints, greeting cards, typography quotes, branding, and more!

Use it in ink, watercolor, or gold foil based designs or all on its own! Handcrafted fonts have become all the rage. Pick up this Font Duo package and get ready to take over the design world by storm!

Wanting to make sure you had everything you needed to make your project complete with that handcrafted feel, I’ve included: 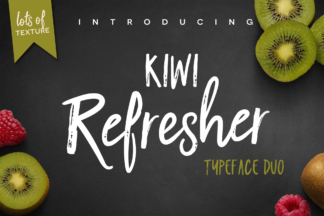