“Macaw” is a welcome addition to our library, a modern serif typeface with roots in classical typography. Its forms are sober and delicate in its lightest weights and as the width increases to the boldest, it unleashes a powerful and distinctive emphasis on your project.
Developed in a range of four weights with a matching set of true italics, the design of Macaw takes its inspiration from the Italian newspaper market at the beginning of last the century, a time where roman typography was predominant. In fact, the main purpose of this typeface is to preserve versatility and legibility, to prescind from any text size.
A multilanguage serif family with a unique fluidity to modern and classic projects. Particularly useful for any editorial need and seamlessly adaptable to any destination of use such as corporate identity, web design, and social feeds.
Specifications:
– Files included: Macaw Light, Macaw Regular, Macaw Medium, Macaw Bold with corresponding italics
– Formats: .otf
– Bonus Included: Macaw Variable
– Formats: Variable .ttf, Variable .otf
– Multi language support (Central, Eastern, Western European Languages)

Be the first to review “Macaw Serif Typeface, including Variable” Cancel reply 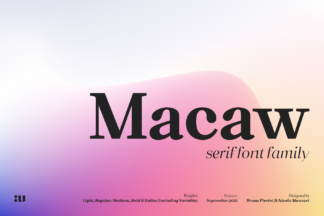