Simple, clean, and fun — MacGuffin is like if Dr. Seuss and a highway sign got put in a blender and came out in font form.

The letters are all crisp, sharp, and smooth; perfect for any crafting project, logo, sign, or anything else you can think of!

You get four fonts in your download: MacGuffin, MacGuffin Wide, and MacGuffin Condensed all have over 500 characters, including tons of extended options for Latin languages. And for fun, I’ve also created MacGuffin Jumble, with the regular-width letters set at fun and quirky angles. (Of course, you could jumble any of these fonts on your own. But this is a pre-jumbled timesaver!)

Be the first to review “MacGuffin: a fun sans-serif font family!” Cancel reply 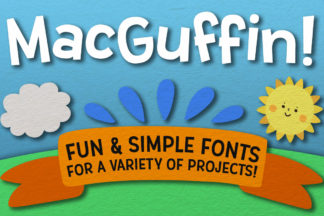