Rated 5.00 out of 5 based on 13 customer ratings
(13 customer reviews)
by MrLetters in ScriptAsk a question

Maisha Script is a handwriting font that is modern and cool that used in greeting cards, wedding invitations, business cards and also suitable for the purpose in the world of photography and more.

Maisha Script comes with 339 glyphs alternate characters that can be accessed easily using programs such as Adobe Illustrator, Adobe InDesign, Adobe Photoshop Corel Draw version X, and Microsoft Word. Fonts have supported Unicode PUA. so that all the alternative characters can be easily accessed in full by designers and other users.

If you have some questions about Maisha Script please send an inquiry email to hello.mrletters@gmail.com, Thank you for a layover. 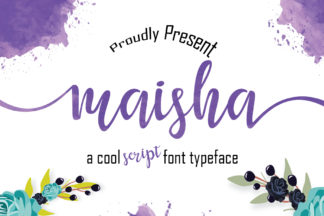