Maqueen is Duo Font, friendly and round display family inspired by a fun and kids stuff. The duo Fonts consists of two styles; Display Sans and Semi Script, which are designed to be combined together. You can use any of the three styles as your main style and use the others to create multilayered typography that all share the same aesthetic.

The typeface is well suited for branding and packaging design, advertisements, posters and even editorial design as a headline style.

Include EXTRAS SWASH on Maqueen Swash

Thank you very much for visiting

Be the first to review “Maqueen” Cancel reply 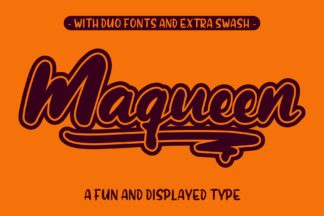