by The Paper Town in Fonts, ScriptAsk a question

Derivate from a logo i made for a branding project Marshmallow has been created with the thought of giving a fresh, readable signature style font.

You can use it for various projects such as branding design, blog headers, signatures, quotes, fashion apparel, business card, stationery and more…

• Marshmallow-Swashes: To access the swashes install as a separate font and type any character between a-j and there you have it!

• Not sure if the font support you language ? Type your text in the font preview box below to test or check the previews for the full character map!
• Marshmallow is compatible with any software that can read a standard font.
• Fonts are provided in TTF and OTF.

• The serif font used all along is Heuristica.
• I used Skia for the Fishtail logo and LazyFox for the Pancakes preview.

That’s all for now i hope you’ll like it !

Feel free to contact me if you have any issue or request concerning the font i’ll be glad to help you.

Be the first to review “Marshmallow Handwritten Font” Cancel reply 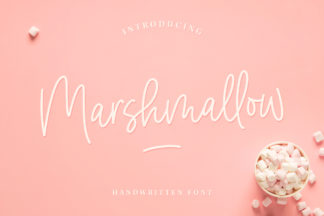