by Lettering in Fonts, Calligraphy, ScriptAsk a question

The Features of this fonts is:
Standart ligatures
Stylistic Alternates
PUA Unicode (Private Use Areas)

Programs that support in this font is a Adobe Photo Shop, Adobe Illustrator, Adobe Indesign, Corel Draw and Microsoft Office.

Be the first to review “Mettani” Cancel reply 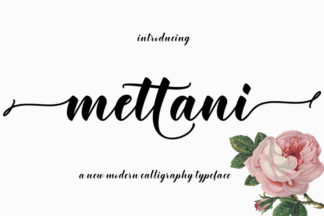