Rebirth begins with light streaks that form a vintage style with a touch of rough and stamp. RIBORN with 4 fonts in number, as “ribs” in your design work, and able to beautify also strengthen your work in the form of type logos, typography, handlettering, packaging, t-shirts, labels, and much more.

Equipped with “RIBORN EXTRAS (ORNAMENT)” as a beautiful ornament and has a classic and minimalist impression.

What did you get?

Be the first to review “Riborn [Bonus Ornament]” Cancel reply 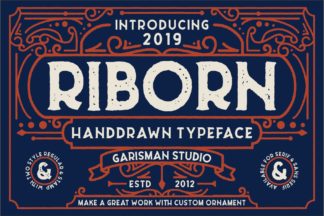