Rated 5.00 out of 5 based on 1 customer rating
(1 customer review)
by Abo Daniel Studio in Crella Subscription, Fonts, CalligraphyAsk a question

Shafeer was built with OpenType features. It has an alternate upper and lowercase character set, Swashes, titling alternates, numbers, punctuation, ligatures and it also supports multilingual.

You only need adding underscore 2x before or after the lowercase character to make the swash. for example __a or a__.

It can be used for branding, photography, invitations, quotes, watermarks, advertisements, product designs, labels, product packaging, and much more!
This font works best in a program that supports OpenType features, such as Adobe Indesign CS, Adobe Illustrator CS, or Adobe Photoshop CC. 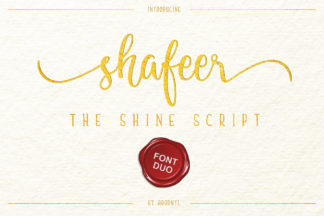