by geekmissy in Fonts, Sans Serif, Slab SerifAsk a question

If you know my style, you know that I like to make fonts with some funky characters that you can mix and match with the regular letters. Sportsball is no different!

I created a semi-athletic-style slab serif font from scratch, using as few nodes/points as possible to ensure it would cut out smooth as butter for crafters. The uppercase set is straightforward, and can be used for a wide variety of projects. Then I made the lowercase set, where every letter is a bit different. Some are taller, some are wider, some have longer legs. Mix them in with the uppercase, and you can make a fun design with personality!

I wasn’t satisfied with just the slab serif, though. I decided to take that font and add spurs to the sides of the letters, giving everything a retro western flair. I also took the same letters and removed the serifs, adding a sans-serif to the family.

Then I figured, what the heck. I took all three styles and made hollow versions! The hollow styles can be used on their own, or they can be layered over the solid versions to make two-color outlined designs!

Be the first to review “Sportsball: a fun sporty font with alternates!” Cancel reply 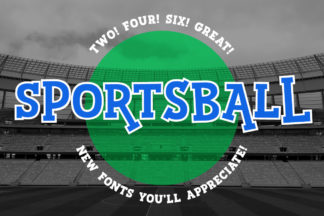 You're viewing: Sportsball: a fun sporty font with alternates! $15.00
Add to cart