You’ll also get Succulent Catchwords — a set of small words like THE, AND, OF, and many more. And they aren’t just in English — there are also catchwords in Spanish, French, German, and Portuguese! Succulent also contains over 350 extended characters from the Latin-1, Latin Extended-A, Latin Extended-B, and Latin Extended Additional character sets, for tons of language support.

Also included in the Succulent Catchwords file are a baker’s dozen of repeating patterns. Just type the letter a few times, and make a cool border as long as you want! (See the included PDF guide for a map of which letter to type for which pattern or catchword!)

Be the first to review “Succulent: a fun narrow hand-lettered font!” Cancel reply 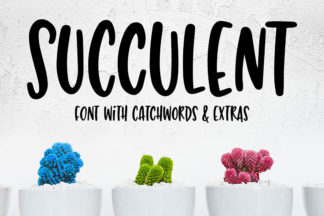