He was named Teressia Script

Teressia is a beautiful handwritten font with natural shades, this will give a touch of beautiful flow to any design idea! it is perfect for designing your own brand and for other designs, these letters look perfect on all printing techniques, foil emboss, embroidery, and others.

You can get all the glyphs by The Glyphs Panel. Available for:

thank you and happy work 😉

Be the first to review “Teressia Script” Cancel reply 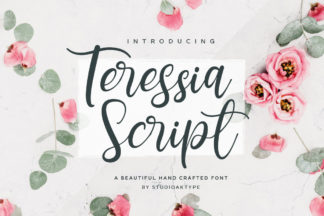