THE STORY OF CORMA

We love dates. I mean, who doesn’t? These were probably our favorite fruits since childhood! At least for most of us. And the healthiest too. Now that’s something new, isn’t it? While we have always reveled in the taste, seldom have we considered the incredible benefits of dates. So we named this font as the date palm, in Indonesian called “Corma”

Corma is a vintage display family including Regular and Textured versions as well as Italic versions of each. it’s perfect for logos, name card, magazine layouts, invitations, headers, or even large-scale artwork. Corma includes 4 OTF & TTF files within the Zip folder.

That’s it! Get cracking!! I hope you have as much fun using it as I did making it 🙂

If you are still unsure, feel free to drop me a line, I’ll try to get to you as soon as possible 🙂 Now go ahead and Get designing already! 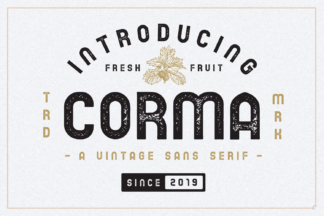