This font was created to look as close to a natural handwritten script as possible by including some alternates lowercase, ligature and underlines. Perfect for any awesome projects that need hand writing taste.

Comes with regular and italic. Built in Opentype features, this script comes to life as if you were writing it yourself. Also support multilingual.

Be the first to review “Theory Of Signature” Cancel reply 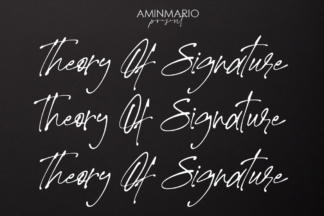 ✦ SUBSCRIPTION
You're viewing: Theory Of Signature $18.00
Add to cart