Trailfinder is a strong brush script font with a lot of variety. The textured and dynamic letterforms are excellent for any type of design and they particularly work well with longer texts – which is very uncommon for script fonts, in general.

A full set of alternate letters provides Trailfinder with the diversity needed to create sophisticated lettering. The alternate letter set is also included as a separate font – for access with software that doesn’t support Opentype.

Trailfinder also comes with it’s own swashes, made into a font file for easy access.

Trailfinder supports multilingual characters. Type below to see your text in action or check the full character map provided in the images above. 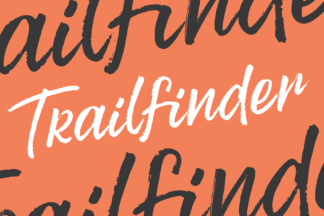