He was named Valerissa Script

Valerisa Script is a beautiful calligraphy handwriting font. fonts look beautiful and sweet after being applied in your various design products such as websites, invitations, posters, mockups, branding cards and more.

Valerisa Script includes a full set of large and attractive international letters, numbers, punctuation and ligatures. All lowercase letters include the beginning and end of the swashes. Also, follow multilingual symbols.

You can get all the glyphs by The Glyphs Panel. Available for:

thank you and happy work 😉

Be the first to review “Valerissa Script” Cancel reply 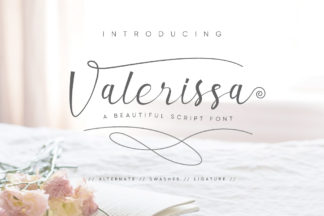