The Bungalow is my handwriting, I wrote it with a feeling of being happy … and feeling loving.Bungalow was built with OpenType features and includes beginning and ending swashes, numbers, punctuation, alternates, ligatures and it also supports other languages 🙂

Thanks so much for checking out my shop!

Be the first to review “Bungalow script” Cancel reply 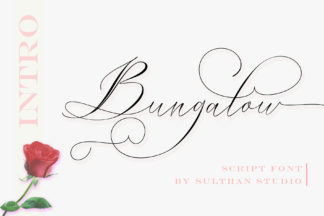