Magma Break Font is a new font duo with two styles : Unique Sans Display and Textured hand lettered Script. The font has a sporty modern look style that will be great for many business such as games, music,  sports, and more. Its name is inspired by the rock that produces volcanic eruptions called magma. This Striped Sans & Textured Script font duo blend perfectly together. The two included styles can be combined together perfectly but are also beautiful on their own. The fonts will be ideal for logos, merchandise, music industry, sports themed website & more.

Be the first to review “Magma Break” Cancel reply 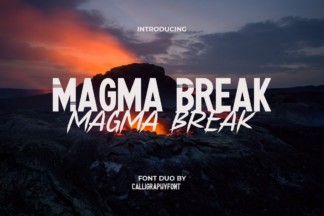