MAKE FOR YOUR BRAND MORE ELEGANT AND COMPLETE

I’m come back with the new ‘Saint Petersburg’ font duo – A fashionable new handwriting font script with some sexy stylish extras:) also good combine the serif. Saint Petersburg font were created to look as close to a
natural handwritten script as possible by including over 20 ligatures
and serif for the couple of these.
With built in Opentype features, this script comes to life as if you are
writing it yourself.
It’s highly recommended to use it in opentype capable software – there
are plenty out there nowadays as technology catches up with design.
Other than Photoshop, Illustrator and Indesign, many standard simple
programs now come with Opentype capabilities – even the most basic ones
such as Apple’s TextEdit, Pages, Keynote, iBooks Author, etc. Even Word
has found ways to incorporate it.
Your download will receive 3 font files, designed to work as perfect
companions or simply as strong standalone typefaces;

Saint Petersburg • A clean, free-flowing script font containing upper & lowercase characters, numerals and a large range of punctuation.
Saint Petersburg Alt • This is a second version of Saint Petersburg Script, with a completely new set of upper & lowercase
characters. If you wanted to avoid letters looking the same each time to
recreate a custom-made style, or try a different word shape, simply
switch to this font for an additional layout option.
Saint Petersburg Serif • A classy serif font containing
uppercase characters, numerals and a large range of punctuation. Creates
a perfect pairing contrast with the Saint Petersburg Script fonts.
If you don’t have any software that understands opentype, you can still
access all the ligatures by loading up all the supporting fonts
included, and toggling between them as you type to get the look you want
🙂

When creating the font, we should take into consideration that each
letter should be able to be connected with other letters. For example,
letter “a” should be well connected as well as with “t” and “t” and with
any other letters. This limits us: we have to start letter from exact
one point and finish in exact second point.

By using these ligatures, you can give realistic handlettered style, escaping font “pattern” effect

Thanks for visit and looking for. 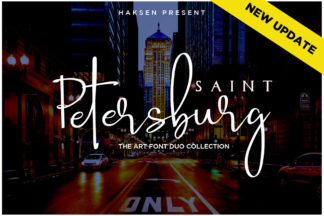