by Flycatcher Design Store in ScriptAsk a question

Rawkstone is an eye-popping signature-style font duo perfect for giving your designs character! Throw it on a website header, a business logo, or a party invite and let this typeface do all the work for you. Plus it’s filled with tons of opentype feautures such as language support, etc.

Wanting to make sure you had everything you needed to make your project complete with that handcrafted feel, I’ve included:

Be the first to review “Rawkstone Font Duo” Cancel reply 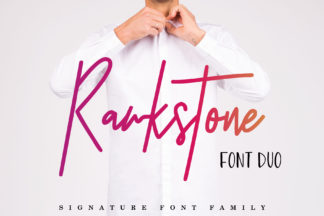